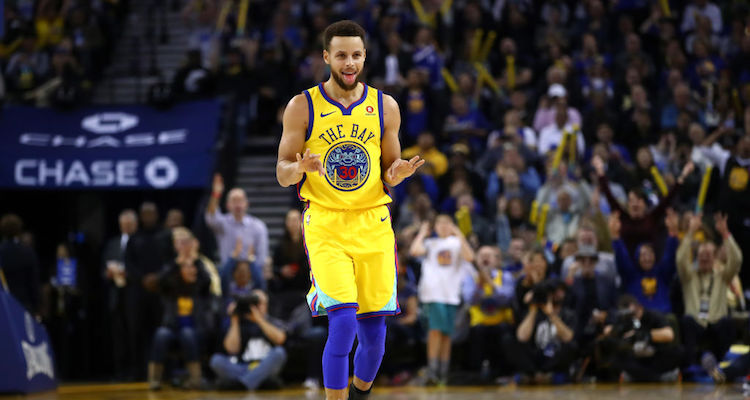 The Golden State Warriors just won their third NBA championship in four years, and they have probably the best starting lineup in the history of the game. So unless LeBron somehow teams up with Anthony Davis, Giannis Antetokounmpo, and DeMar DeRozan this summer, the Warriors really don’t need to make any adjustments to their roster or game plan to win again next year.

Fortunately that didn’t stop one Reddit user from coming up with a hilariously original plan to make the Warriors even more unstoppable.

Over on Reddit’s NBA message board on Monday, user danmaker99 proposed a radical, technically legal (probably?), but ultimately unfeasible new way for the Warriors to use Steph Curry, who is probably the best pure shooter of all time.

Here’s what he said:

Serious question: why can’t 4 Warriors starters lock arms and form a ring around Steph Curry, so he can take open shots?

Picture this: the Warriors go out and get 4 incredibly strong bodies with really long arms. For the entire game, on the offensive end, those 4 guys lock arms together and form a circle around Steph Curry so that none of the opponents can get to him – sort of like how you might protect a quarterback if you didn’t know the rules of football.

Steph Curry barely needs much daylight to shoot, so as long as they leave around a foot of room around him, he can probably just bomb away freely every possession. Why don’t the Warriors do this? Is Steve Kerr an idiot?

Of course, it would be almost impossible to pull this play off more than once. How would you get Steph Curry the ball? The other guys on the court couldn’t pass it to him because they’d be busy building their little circle of trust. So Curry would have to carry the ball down the court himself. But after he got into his shooting circle a few times, the other team would start picking him up at halfcourt, making it impossible for him to get into the shooting circle.

So no, this won’t work. And even if it did, the NBA would create a rule to outlaw the strategy immediately.

But you have to admire the way danmaker99 thinks. Dude is so far outside the box, he can’t even see the box or remember what it looks like.