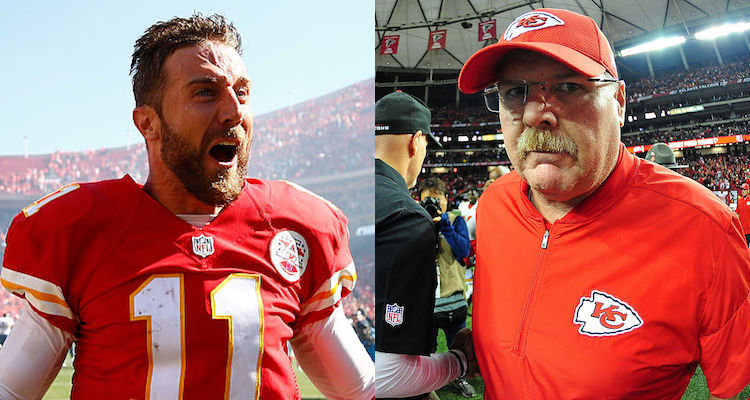 All the talk coming out of the Kansas City Chiefs training camp so far has been about the play of Pat Mahomes.

The 10th overall draft pick in 2017, Mahomes became the Chiefs’ starting quarterback when the team traded Alex Smith to Washington back in January. Now, with eight interceptions in seven practices, some Chiefs fans are getting a little nervous about their signal caller.

One person who is not concerned is Chiefs coach Andy Reid. And while speaking to the media on Thursday, Reid made some comments in defense of Mahomes that a lot of people interpreted as a veiled shot at Alex Smith.

“He’s been doing a great job,” Reid said of Mahomes. “I know people wrote about the interceptions. I told you at the beginning of camp, I don’t care about all that stuff. I want him to test the offense. It’s so important. It’s so important we give him a ton of plays, I want him testing it.”

Then came the part people thought was a reference to Alex Smith.

“If you don’t have the intestinal fortitude to go test it,” Reid said, “you’re going to be one of these quarterbacks who checks it down every time, and that’s not what it’s all about.”

“If you don’t have the intestinal fortitude to go test it, you’re gonna be one of these quarterbacks that checks it down every time… and that’s not what it’s all about.” pic.twitter.com/sJTtkdM3JT

During his first few years with the Chiefs, Alex Smith acquired a reputation for being a conservative, checkdown quarterback who took very few risks. When Reid talked about “one of these quarterbacks who checks it down every time,” a lot of people immediately assumed he was referring to Smith. Which would be pretty savage.

However, a number of people—such as the Kansas City Star’s Vahe Gregorian and Arrowhead Pride’s Pete Sweeney—have come to Reid’s defense. They point out that Smith is coming off his best season to date in which is posted career highs in yards (4042), touchdowns (26), yards per attempt (8.0), QB rating (104.7), and adjusted yards per attempt (8.6)—a category in which he also led the NFL.

Reid’s defenders also point to the praise he heaped on Smith just a few weeks ago.

When you consider all the facts, I think the shade was unintentional. But unintentional shade is still shade. Reid should probably choose his words more carefully in the future.