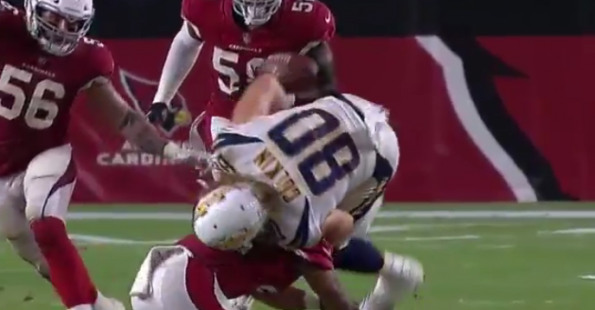 If this is the standard on what will be called during the 2018 season, the NFL is likely to lose millions of viewers and we will witness the death of the league.

On Saturday, Arizona Cardinals safety A.J. Howard seemingly made a textbook tackle that separated the ball from a Los Angeles Chargers wide receiver, but instead of being congratulated for a great tackle, he was rewarded with a 15-yard penalty for hitting a defenseless receiver.

This is was the penalty call in the Cardinals game, called hit on a defenseless receiver but more likely it was the new lowering the helmet rule pic.twitter.com/yrDHosa0ab

So this is now a 15 yard “hit on a defenseless receiver” penalty in the @NFL?
How exactly are DBs supposed to make plays anymore?
Every big hit is followed by a flag.
The de-balling of a once great sport continues.@Cardinals @Chargers pic.twitter.com/u8yUP658SS