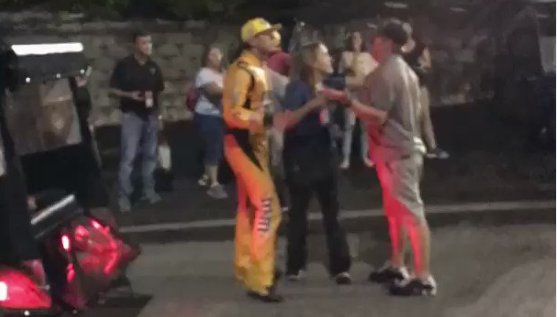 On Saturday, Kyle Busch had a rather interesting day that was filled with him finishing 20th at Bass Pro Shops NRA Night Race in Bristol, but would end on a sour note by nights end.

Following the race, Kyle was not a liked man following his bumping of Martin Truex Jr. during the race, and some fans wanted to give him a piece of their minds.

Two videos began circulating Saturday night showing a fan saying derogatory things to Busch, with one of them taking it a step further and getting in his face after Busch got off a golf cart to confront the heckling fan.

We have just obtained a copy of the video from a trusted source of the incident involving a fan and @KyleBusch that took place after the #BassProNRANightRace at @BMSupdates #NASCAR pic.twitter.com/QcF2slcrOJ