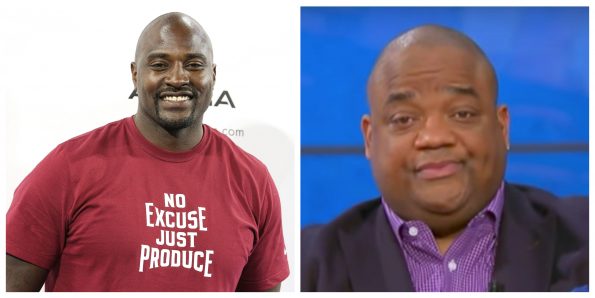 On Tuesday, many took to social media and raved about LeBron’s new HBO show ‘The Shop’ where he and other insanely rich athletes & entertainers talk about various topics and their personal experience.

While many loved the unpolished LeBron speaking frank and cursing up a storm, others didn’t like the overall direction of the show, including Jason Whitlock. The Fox Sports personality took to his show on Wednesday and blasted LeBron for being ‘ratchet and ghetto’ and stating he made an fool of himself during the entire process.

Whitlock didn’t get any push-back for his comments, but that’ll soon change with his new co-host Marcellus Wiley.

The former ESPN personality left the company after 11 years and is just waiting in the wings to begin his new venture on FS1, which includes partnering with Jason Whitlock.

Wiley sent a notice his way on Wednesday to let Whitlock know that his takes won’t fly any longer once he begins working.

.@WhitlockJason should know actions speak louder than words. Enjoy these uncontested shock jock rants before I start because these won’t fly far on my watch. #oha https://t.co/YZRrHBRxsd

Damn, I have to educate Whitlock AND help his likability? ??‍♂️? https://t.co/NJAZMlvlVB