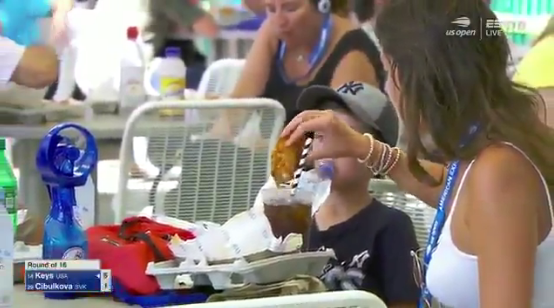 While attending a sporting event, you’re likely to numerous crazy things on the field of play as well as in the stands as some of the weirdest and craziest people tend to come out.

On Monday, fans were enjoying their day at the U.S. Open, sipping drinks, eating good food, enjoying the festivities, and dipping chicken fingers in ice-cold soda. Wait, what?

While scanning the crowd for reactions, their was a woman seated with her child and she inexplicably took a chicken finger and dipped inside a soda before she ate it. What part of the game is this?

Why are we dipping chicken fingers into soda? Why is this happening? Someone call the cops right now! pic.twitter.com/iO9KsgYE4O

Fans were equally as confused:

This is legit psychopath status

She must be related to Michael. pic.twitter.com/gw8hS4DToy

I have seen some crazy things in my time here on earth. Nothing has prepared me for this.

More of an embarrassment than the George Costanza debacle during the Open. pic.twitter.com/PCaQZzUH77