REPORT: Vikings’ Everson Griffen Threatened To Shoot Someone At Hotel on Saturday
NFL

REPORT: Vikings’ Everson Griffen Threatened To Shoot Someone At Hotel on Saturday 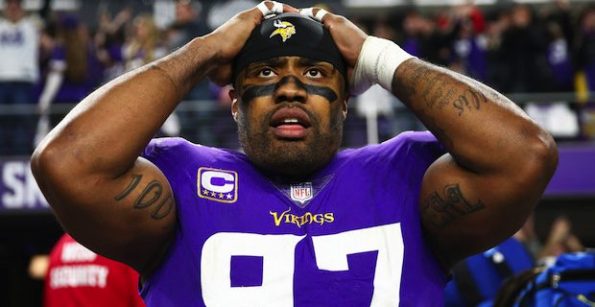 The Minnesota Vikings got shocked at home against the Buffalo Bills, but it looks like they lost more than just a home game over the weekend.

Everson Griffen didn’t play against the Bills on Sunday, as he was listed as having a knee injury, but the truth soon came out 24 hours later.

“The Minnesota Vikings say they are concerned about the well-being of one of their star players after hearing he was involved in an incident this weekend.

Sources confirmed to 5 EYEWITNESS NEWS that defensive end Everson Griffen was involved in an incident at the Hotel Ivy on Saturday.

According to police records, a person at Hotel Ivy was verbally threatening to shoot someone in the middle of the day on Saturday.

The Minneapolis Police Department redacted that person’s name from the report, but a source confirmed that it was indeed Griffen named in the report.

According to the report, at one point staff members moved to the back of the office while Griffen paced around in the lobby.

Police dispatch audio archived online includes a dispatcher saying that the suspect said to the staff that if someone wouldn’t let him in his room that he was going to shoot someone.

At one point, the report said the caller stated that Griffen threatened to assault staff members and was laying on the lobby floor.”

#Vikings DE Everson Griffen has been dealing for weeks with a serious, personal health-related issue, per sources. The team and his agents are helping him. A statement from GM Rick Spielman: pic.twitter.com/vfd3Vn8Yok