>Total Pro Sports
NBA
Turns Out Allen Iverson Still Gets $800K Annually From Reebok, & The CEO Says He’s Worth It

Turns Out Allen Iverson Still Gets $800K Annually From Reebok, & The CEO Says He’s Worth It 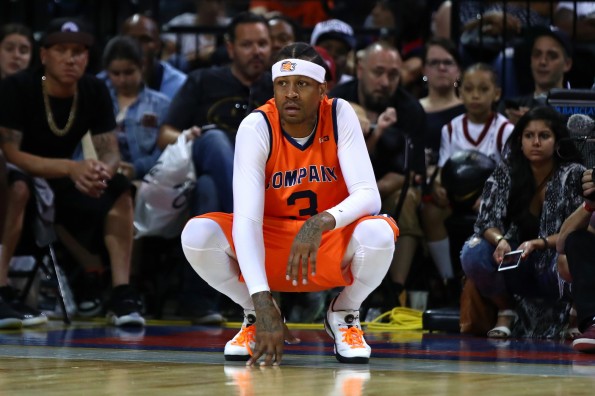 Allen Iverson’s money troubles have been well documented since his playing days ended with the recent reports of him losing his 3rd home to foreclosure and the Georgia Department of Revenue recently hitting him with a tax lien, claiming Iverson owes taxes for the years 2012-2013 to the tune of $200,108.37.

Crazy stuff, but don’t get things twisted at all. The Answer is not broke at all. In fact, he’s still receiving an insane amount of money annually from Reebok, despite playing his last game way back in 2010.

Reebok is still paying him $800,000 a year, as it has been since they signed “The Answer” to a lifetime contract. Just last week, Reebok CEO Matt O’Toole said the company thought it was still worth it.

“He has a place in our heritage, and there is a group of consumers who want to connect to that,” O’Toole said on the Bloomberg Business of Sport podcast. “He’s relevant for a lot of our consumers.”

“He’s an iconic personality,” O’Toole said. “Let’s get on a plane to Shanghai together. You bring Allen Iverson into a market like that. I’ll stand firmly that he has a big place in basketball and sports history.”

After being selected first overall pick in the 1996 draft by the 76ers, Iverson  received a 10-year, $50 million contract from Reebok. When Iverson led the Sixers to the 2001 NBA Finals and was named league MVP, Reebok signed him to a lifetime deal. In addition to the $800,000 the former guard receives annually, the contract also included the much talked about trust fund worth $32 million that Iverson can’t touch until 2030, when he turns 55.

Iverson’s money issue will end when he gets a $32 million trust fund that Reebok has for him that he can’t access until he turns 55 in 2030.

Unfortunately, he won’t get the full amount after he made an agreement with his wife Tawanna back in 2010, in hopes of keeping his marriage alive, that was centered around the trust fund.

The post-nuptial agreement states that Iverson agrees to forfeit all of the $32 million is he violates the following terms:

As you can tell, he did not live up to those terms and Tawanna re-filed the divorce petition and was awarded everything. Just before the divorce was set to become final, Tawanna had a change of heart and agreed to give Iverson half of the $32 million Reebok trust.