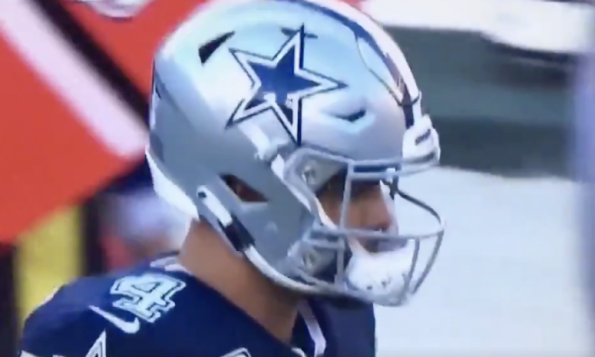 During Sunday’s game against the Washington Redskins – Dak Prescott was trying to get to the first-down marker in the first half when he took a shot to the head from Redskins cornerback Greg Stroman. He was in obvious pain as he laid on the ground.

The Dallas Cowboys QB headed back into the game against the Redskins after being checked in the medical tent, but many viewers noticed that he appeared to use smelling salts upon his return.

“That’s a concussion,” broadcaster Tony Romo said on CBS right after the hit. “He’s going to be done. He doesn’t know where he is.”

Chris Nowinski, founding CEO of Concussion Legacy Foundation, took to Twitter shortly after and ripped the Dallas Cowboys medical team for sending Prescott back into the game and giving him smelling salts after evaluating him for a concussion.

I cannot believe a Dallas Cowboys staffer just gave Dak Prescott SMELLING SALTS minutes after a #concussion evaluation!!!!!!!! What is wrong with the @NFL????

This is a new low for medical abuse of players. pic.twitter.com/ThZamGsGO4

My predictions on fallout from Dak Prescott #AmmoniaGate:

1. #NFL #concussion committee holds an emergency meeting this week, bans smelling salts for players that have been evaluated for #concussion.

2. @CBS gets yelled at by #NFL for putting it on camera twice. pic.twitter.com/rcBwl0QH8H

Dak Prescott caught on camera using smelling salts after he was checked for a concussion. Cowboys radio broadcast said he was getting his “hand” checked. Never seen someone use smelling salts to help their hurt hand. https://t.co/fFciHdNJ2S