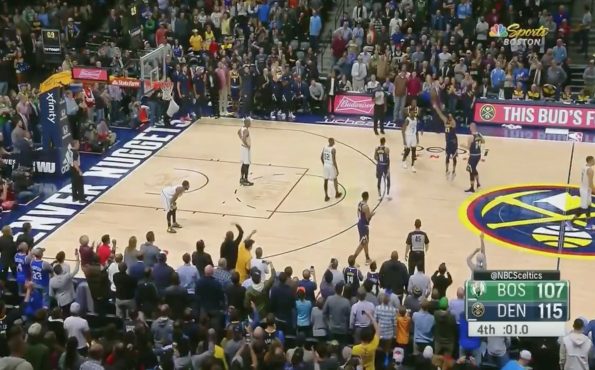 Jamal Murray had a game to remember on Monday night after the Boston Celtics could do nothing to stop him on the court as he poured in 48 points in a 115-107 victory.

The Denver Nuggets guard tried to make it even more memorable by taking a last ditch three at the end to eclipse the 50-point mark, a move that didn’t sit well with Celtics players, most notably Kyrie Irving.

The Celtics guard responded by throwing the ball deep, deep into the stands.

Kyrie threw the ball into the crowd after Jamal Murray's attempt to make 50-points as the game ended pic.twitter.com/Vbx3oNxmaf

“Obviously, I was pissed at the game, but it’s time to decompress and move on,” Irving told reporters after the game. “Congratulations to him having 48 points. He did it in a great fashion against us. Our defense has to be better, especially against a player like that in the pick-and-roll. He was the primary concern tonight and he made us pay in certain instances of making some tough shots and some tough layups.

“But the ball deserves to go in the crowd after a bulls— move like that. So I threw it in the crowd.”

Not the first time Murray has upset his opponent at the end of game. Last season, Murray was dribbling out the clock at the end of a win over the Lakers when he decided to clown on Lonzo Ball.

The Lakers didn't take kindly to Jamal Murray dribbling around Lonzo to end the game. pic.twitter.com/bGBPiQy5nq