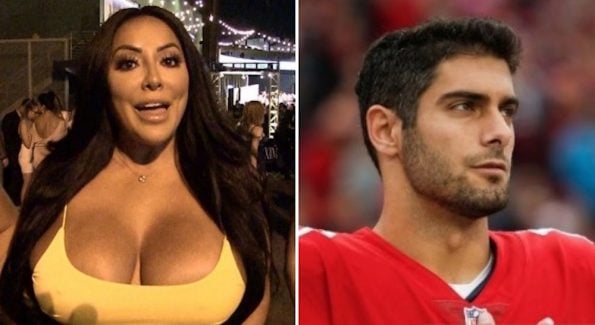 Kiara Mia hinted a few times that something other than dinner happened that night, but never revealed details until recently. The ever popular adult entertainer hosted a party Friday night at Crazy Horse III strip club in Las Vegas and she felt compelled to tell everybody how the San Francisco 49ers QB gave her some nice loving that night.

“We’re told she spent the night drinking Don Julio while getting and giving lap dances. She also got on stage and made rain with hundreds of dollars. Mia said Garropolo is the only guy to ever make her “tap out,” and gave him the nickname of the “energizer bunny.” She also set the record straight and explained they met on social media and that it was a real date, claiming she did not get paid.We’re told Mia said she felt a real connection with the QB and that she had a ton of respect for him and the way he treated her on their date, commenting that he was a “f*cking gentleman.”

Who’s coming to party with @theonlykiaramia this Friday night? Buy a bottle at crazyhorse3.com and she’ll come to your table to do a round of shots with you! ?‍♀️?‍♀️??? #kiaramia #vegas #whathappensinvegas #vegasbaby