>Total Pro Sports
Boxing
Adrien Broner: “Yall Got Me F*cked Up If You Think I’m Bout To Lose To Manny Pacquiao” (VIDEO)

Adrien Broner: “Yall Got Me F*cked Up If You Think I’m Bout To Lose To Manny Pacquiao” (VIDEO) 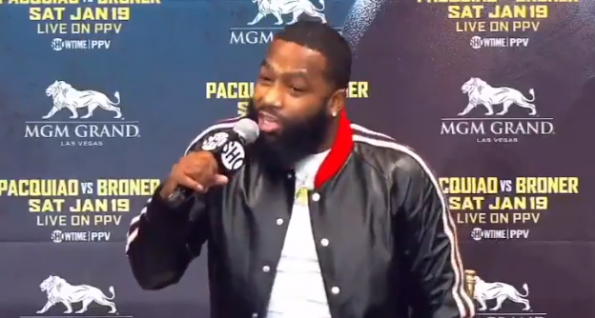 If there’s one thing Adrien Broner can do, he can sell the hell out of a fight. He has the mouth of a Floyd Mayweather, but not the boxing skills of his on-again, off-again friend.

That boisterous Broner was on full display during his press conference with Manny Pacquiao, and he had a bunch of quotes in there that had the entire crowd laughing like crazy. During one instance, Broner became very annoyed at Fox Sports’ Brian Custer, who brought up Pacquiao’s challenge to Floyd Mayweather.

Broner shot back, telling Pacquiao, “F*** Floyd, no disrespect. But he ain’t fighting Floyd, he fighting me. I’m about to beat your ass for that disrespect. Floyd already beat you.”

? Adrien Broner reacts when Manny Pacquiao makes it clear that he wants to rematch Floyd Mayweather after this fight. pic.twitter.com/IkzeiaUYo8

“Y’all got me f***ed up if you think I’m going to lose to Manny Pacquiao. I’m going to beat his mother f***ing ass. It’s going to be a hell of a fight. I’m not coming to just pick up a check. I know when I win this fight, there’s more money to come.”

Pacquiao last fought in July when he knocked out Lucas Matthysse to capture the WBA “regular” welterweight title. Broner’s last action came by way of a draw earlier this year, when he fought former champion Jessie Vargas.