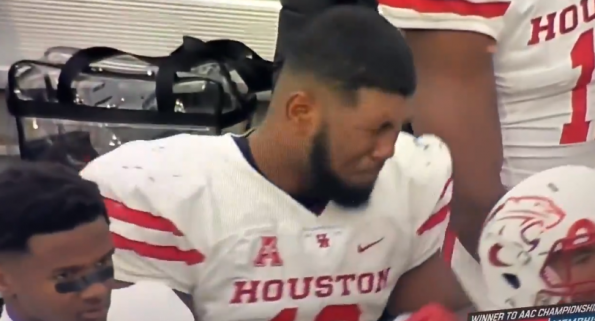 On Friday, the Houston Cougars had a 21-17 lead against the Memphis Tigers with Ed Oliver on the field for the first time since playing against Navy. The drama between the potential top-five NFL draft pick and Houston head coach Major Applewhite seemed to reach another level as Oliver did not play at all in the second half of that game.

The defensive lineman was seen standing on the sideline with his teammates, when he suddenly began to get emotional and start to cry.

Weird situation unfolding in Memphis … Houston DT/prospective Top 10 pick Ed Oliver came back today. Played first half. Hasn’t played at all in the second half — broadcast team says they weren’t given a reason. Cameras just caught him getting emotional on the sideline. pic.twitter.com/FqaZXy6qbG

It turns out that it wasn’t any controversy as Oliver suffered a setback to his knee injury and is expected to need a few weeks to recover.

Applewhite tried to squash any notion that Oliver had played his final game with the Cougars, which was widely speculated during Friday’s second half.

Asked Major if he thought this was Ed Oliver’s last game: ‘I don’t think so. That’s not the impression I’ve ever gotten from him.’