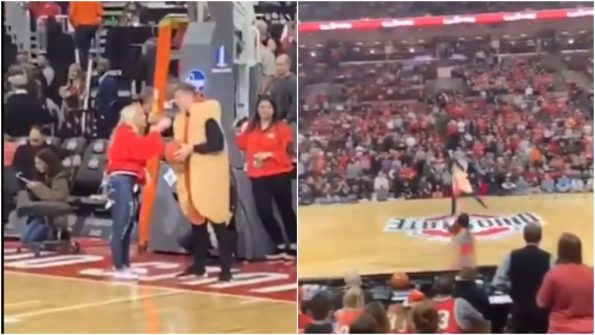 You’ve likely seen people shoot their shot at the opposite sex before, but I guarantee you’ve never seen it quite like this.

You miss 100% of the shots you don’t take. Last night, the Ohio State Buckeyes suffered their first loss of the season at the hands of Syracuse, but at least one fan in the building went home happy. A college student wearing a hot dog suit was getting set to shoot a half-court shot to win free hot dogs for a year, when a sideline reporter asked him to tell the crowd his name.

That’s when the guy decided to shoot his shot with the reporter and then run out to mid-court and shoot the actual shot that went in.

“Most people call me Robbie, but you can call me anytime.”

Not all heroes wear capes, some wear a weiner? @SportsCenter #sctop10 pic.twitter.com/3sSn0MDr66