NASCAR Driver Wins Race, Leans In For A Kiss & Gets Savagely Rejected By Beauty Queen (VIDEO) 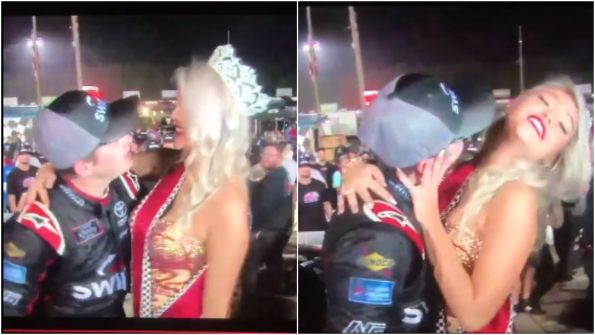 During the 51st annual Snowball Derby at Five Flags Speedway in Pensacola, Florida – NASCAR driver Noah Gragson secured the victory due to brilliant overtake following a restart with only seven laps remaining in the race as he held on through the checkered flag.

Gragson was feeling so good about himself and on cloud nine at the same time, that he thought he would continue to let the good times roll by shooting his shot at a Snowball Derby model.

As the young woman made her way over to him, Gragson pulled her in by the waist and leaned in for a kiss. She immediately put her hand on his face and leaned backwards to shut him down.

It didn’t end too bad for Gragson. Despite the initial embarrassment, the young driver ended his day with the last laugh as he finally got that kiss.