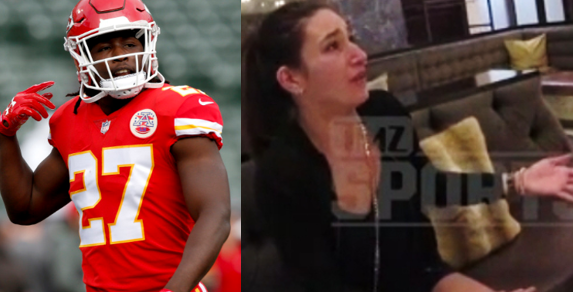 Kareem Hunt is going to have a long road to get back into the National Football League following a damning video of him pushing a 19-year-old woman as well as kicking her to the ground during a dispute at a Cleveland area hotel.

The Kansas City Chiefs would soon release the running back from the roster after it was revealed that he initially lied to them about what happened and what he exactly did, which further lets you know that he had no clue there would be video evidence.

On Friday, ESPN released a report that pretty much confirmed that the young lady at the center of it all, not only called Kareem Hunt  the n-word, but struck him first during the altercation.

“I only know those girls through a friend,” Watkins tells officers in the video. “They invited us to a club tonight. We got to the club, and they were overly drunk, as you can tell. But come to find out, they’re not even 21. They’re 19 years old. We were like, ‘Can you guys please leave us alone?’”

Watkins tells police Ottinger and her friend, Dominique Hamilton, got along fine with everyone throughout the evening, but that ended inside Hunt’s residence. According to Watkins’ account, Hunt said Ottinger and Hamilton couldn’t stay the night. Watkins says he offered $20 when they said they didn’t have enough money for an Uber ride home. After he sent them into the hall, Ottinger began to scream and pound on the door, according to his account.

“They’re in the hallway, like standing by the elevator,” Watkins tells police. “I come out and I’m like, ‘You guys are being too loud. Please just leave us alone.’ She started freaking out, grabbing the back of my head. She broke my necklace. She tried calling me the N-word. She called us n—–s and s— like that. We’re like, ‘There is no point of you to do that. We just want you to leave us alone.’ Then they started getting aggressive, hitting us.”

He says Hunt’s friend, Nicole McManamon, went into the hall to try to calm Ottinger down, and that’s when things got even more physical.

“[McManamon] was being really nice, like, ‘Hey guys, could you please leave? You’re being obnoxious; you’re bothering us. Please leave,” Watkins tells police. “And then they f—ing tackled her.”

A friend of Hunt’s attempts to hold Hunt back, but Ottinger appears to reach past that man and strike Hunt. Several of Hunt’s friends drag him back into his apartment, but he surges back into the frame and careens into another friend, who careens into Ottinger, who falls near a wall.”

This in no way excludes Hunt from what he did, as him being a professional athlete with more to lose, he should’ve known better before engaging in an altercation that now has his career in doubt.

Here is The TRUTH Behind the Kareem Hunt Hotel Lobby Video….