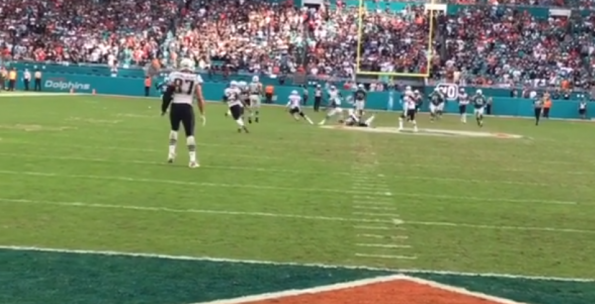 There is a high probability that New England Patriots fans did not go to sleep last night and are still in front of their TV’s in complete disbelief as what transpired at Hard Rock Stadium on Sunday.

Miami Dolphins were down 33-28 with seven seconds remaining when they lined up at its 31-yard line for what was likely to be the game’s final play when Quarterback Ryan Tannehill completed a pass to receiver Kenny Stills, who then lateraled to fellow receiver DeVante Parker, who also tossed it back to running back Kenyan Drake who then outran everybody to score a last second TD.

Now, this is the view that everybody has seen:

A fan view from the stands shows that Patriots TE Rob Gronkowski was barely even moving during that play, until Drake got closer to him, but by that time he had already built up enough speed to outrun him.