Like can suck when you’re a Toronto Maple Leafs fan. The city is said to be the Mecca of hockey, yet their team hasn’t won a Stanley Cup since 1967…when there were still only 6 teams in the league!

Not only that, but the Leafs haven’t even managed to win a single playoff series since 2004 — the season before the infamous 2004-05 NHL lockout.

Droughts like that make it hard for us not to feel sorry for passionate Leafs fans like Claudianne Godbout. The Canadian CPA hasn’t been shy about showing her support for the Toronto Blue Jays in the past…

But more recently it was the Leafs who were getting all the love from Claudianne during her trip to Turks & Caicos.

At this point you’d probably like to see more from Claudianne. We’ve got you covered below:

Erin Andrews Speaks On NHL Players And Their Teeth (VIDEO) 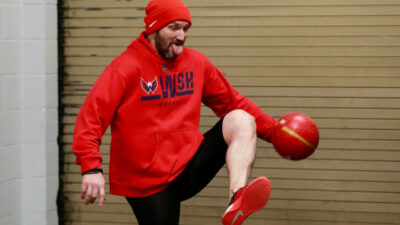